Some thirty ramblers turned up for this relatively long walk.

Walking through the streets of Midina

Climbing up towards Dwejra

The area of the Sta Marija Fireworks Factory 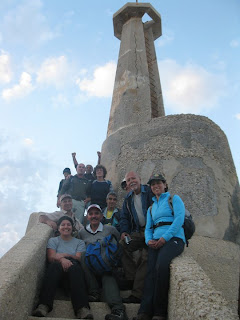 The end of the line
Posted by Ramblers Association of Malta at 23:48 7 comments:

Six NGOs have criticised the legal exemption being granted to Church organisations that have refused to register with the Voluntary Organisations Commissioner.

BirdLife, Friends of the Earth, the Malta Organic Agriculture Movement, Nature Trust, the Ramblers Association and Żminijietna said the law introduced in 2007 meant that, to benefit from state funding and donations, all organisations had to register. However, several Church organisations chose not to register and were recently said to have been given a ministerial exemption to be allowed to benefit from funds raised by the Malta Community Chest Fund, now declared a state organisation.

The NGOs believe such a situation, whereby legislation is passed through Parliament only for the minister concerned to give blanket exemptions for unknown reasons, had given rise to a possibly dangerous precedent.

It could also “perpetuate the notion that laws are only there for certain sections of the population and that the government will bend over backwards, including disregarding its own laws, in order to benefit other privileged sections that believe themselves to be above the law”.

The organisations expressed solidarity with NGOs Commissioner Kenneth Wain whose job it was to uphold the law yet found “his efforts thwarted by the same government that appointed him”.

The President said last month unregistered Church organisations would still benefit from this year’s annual charity telethon L-Istrina and a government spokesman said this could be done through a ministerial exemption.

The Church, which so far has not explained why it had not yet enrolled, said this had nothing to do with not wanting to report income and expenditure, adding talks about enrolment were nearing conclusion.

May I ask for what these NGOs deserve such funds? Is this their achievment and performance? These NGOs they are after the money and nothing else, shame on them.

Would it not be better if Birdlife Malta would publish its accounts so that we see what their wages and salaries are.

Is it possible that no BLM member has ever read my request, and either instructed me as whether they exist and as to where I might download a set of audited accounts.

Come on guys even FKNK has a set of audited accounts sumbitted upon request.
Johnny Xerri(8 hours, 1 minute ago)
Would it not be better if Birdlife Malta would publish its accounts so that we see what their wages and salaries are.

Is it possible that no BLM member has ever read my request, and either instructed me as whether they exist and as to where I might download a set of audited accounts.

Come on guys even FKNK has a set of audited accounts sumbitted upon request.

I would rather see the church organisations benfiting from the money, then some tree/bunny/bird hugging environmentalist (or self employed possibly (thats why accounts are requested) getting a hefty wage from bird? protection).

And this from people who believe that they are above the bird directive and eu legislation, who do not acknowledge the right to derogate and the ECJ ruling that autumn is no salternative to spring.

This shows just how spiteful some NGOs are....first it was spite agianst hunters....nw its against the Church and its beneficiaries...mainly children, battered women, and those with huge problems....cheers guys...your 2011 slogan should be save birds at the cost of the needy children/wives/orphans
patrick zammit(11 hours, 43 minutes ago)

Simply put, the church wants the rights (funds) without the duties (registering). And it finds the govt ready to accommodate it.
Charles Sammut(9 hours, 12 minutes ago)
Because in Malta Canon law trumps Civil law. Like in Iran and many other Islamic states. Canon law is to Catholicism what Sharia law is to Islam.
Joseph Cauchi(12 hours, 55 minutes ago)

Come on, how dare these NGOs try to compare themselves on the same level with the Church’s organizations?

Isn’t it arrogance at its best, when most of these NGOs hardly comprise of more than a handful of members and they try to give the mistaken impression that they actually represent thousands of members; which in fact is not the case?

The Commissioner Kenneth Wain is correct in his insistence as he is abiding by the letter of the law and for this he should be congratulated.

However, if the law in the Voluntary Organizations Act is flawed, then the only sensible thing to do is for the Government to amend it and all these “misunderstandings” will be settled once and for all.

Its not about comparing its about transparency and accountability church organisation or not it should show clearly how the funds were used. Church organisations are made up by human beings so very possible to be corrupt as much as other organisations. Don't forget those priests abusing of inocent children, imagine what can be done with the money.
Johnny Xerri(1 hour, 58 minutes ago)
That's why ngo's like BLM should have published accounts available to all, so that people who donate and tax payers (who indirectly fund BLm through their taxes whenever the gov gives BLM some land or financial aid) would know how their money is spent in all transperancy...if its going in conservation plans or in wages :)
Posted by Ramblers Association of Malta at 23:52 No comments:

Walk around the Siggiewi area.

Walking through the streets of Siggiewi

Statue of Our Lady near San Dawdar

Posted by Ramblers Association of Malta at 21:34 No comments:

The Forgotten Hamlets around Naxxar and Mosta.

Heading towards the Dolmen

Posted by Ramblers Association of Malta at 20:02 8 comments: